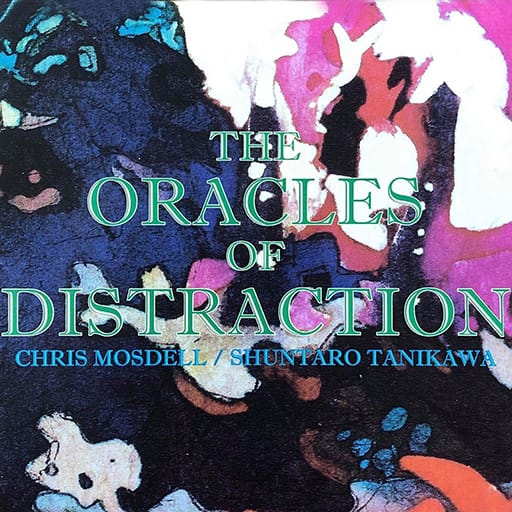 The Oracles of Distraction

The I-Ching of music: 77 musical interludes adjoined to a set of 77 “oracles”. Contained within an elaborate double CD packaging, a numbered pack of bilingual distractive oracular cards can be programmed to equivalent musical tracks. Written in parallel by Chris and the renowned Japanese poet Shuntaro Tanikawa, and composed by the Mosdell/Imai partnership.

SINGING IN THEIR OWN LANGUAGE

“The Oracles, as the title implies, were written and composed to be distractive. But I still like to think of them as exultations. As the Sexguitar Birdboy sang: “To close the eyes is to speak, to speak is to see,” and it is him that I took up with. I was there, albeit momentarily, in the Great Morning of the Violin Hunters. I rode over the snow veldt passing flame from mouth to mouth. I was the one burning the Gong Cinemas and the Trance Halls, stinging youth to death and living forever. I was, in that brief span of time, Legend Boy, one of the Miracle Kids, Gun, the Dagger Poet—searching for a noble language, and being tortured by true love.

It was under this guise that the Oracles of Distraction became sanctuaries— sanctuaries of a personal escape. And to this end they still are. Each card in this set has the properties of an allotrope—a compound ideogram having an interchangeable voice dependent on its musical frame. Similar to their Chinese counterparts, these ideograms are written from a pictorial base. The ontology is a small drawing, the sight given to the word. Musically, the oracles are views over seventy-seven landscapes (for it is how music is viewed as much as it is listened to that interests me). The music dictates the tone of the word, and likewise, the image of the word can have an emotive influence on how the music is accepted. The music can quietly complement the ideograms or conversely be quite incongruous. In a constructive sense the oracles are given to misguide. Looked upon otherwise and their function is misunderstood. They are not directives. They are not instructional. They are, above all, “Somewhere majestic, somewhere unseen/ somewhere between the day and the dream.” They sing in their own language.

I have never really considered the cards in the vein of prophecy but rather think of them as simultaneous views in two languages, (Tanikawa-san’s beautiful and confronting assets/img striding off at a marvelous tangent from my own) separate in their perspectives and supported by their musical accompaniments, having a refractive nature like light entering water. They have always been intended to defy our own logic, break what we see as method.

They are to turn the head, as if glimpsed out of the corner of the eye. Of course, the oracles lend themselves quite easily to interpretation but the idea of prophecy is solely the prerogative of those who might believe in it.

On a practical note, select a card from the shuffled pack and program your compact disc player for the appropriate number. Independent of this the random shuffle selector can be used on your player to arbitrarily select a musical frame for a pre-chosen card. This allows seventy-seven scores for a single ideogramic reading. I have also tried to arrange the musical side of the oracles into a listenable flow so as the linked pieces lead the listener/viewer on some, hopefully adventurous, voyage amongst the islands.”

An exhibition of interactive distraction: seventy-seven large laminated panels, each enclosing a central oracular painting (translucently lit with precision spots) and corresponding poems, were set in crystalline formation in a darkened gallery. The sound system, especially designed and sponsored by Sony, allowed visitors, issued with wireless headphones, to be beamed individual musical tracks when stationed before each oracle. The gallery’s entrance was designed in the mode of a Shinto shrine, with entrance attendants dressed in Shinto maiden attire. As is the customary fashion at Japanese shrines, especially on New Year’s Day, visitors could shake an oracular stick (one of seventy-seven, in this case), and be provided with a distractive reading before entering the installation. There were seventy-seven different admission tickets!