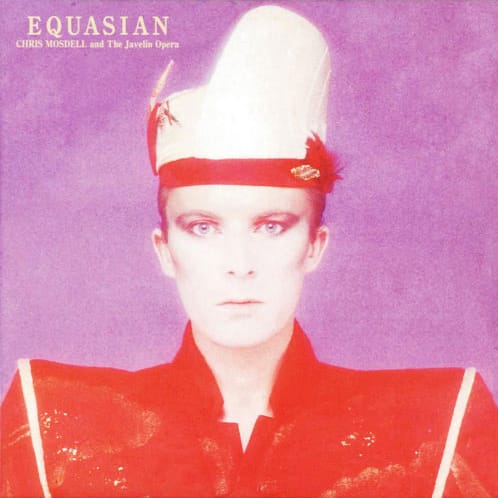 Chris Mosdell and the Javelin Opera

The “visic” (visual music) album—a tripartite melding of lyrics, music and visuals, with Mosdell as the epic “visicist” (sic). A book and record set comprising of ten scientific equations. Beautifully coloured illustrated plates—built from the lyrics in “concrete poem” format—featuring the collaboration between designer/architect Koji Suzuki and Mosdell, and musical compositions by Yu Imai (The Miracle Kid, the wrist-spinner) and Mosdell. Each conceived piece, derived from a scientific dogma (gravitational, chemical, optical), is reflected in an interactive arena, with the visicist experimenting with mutated syntax and grammatical cloning.

“The plot was to bypass language in its phonetic sense and to build a lyric that would irradiate the reader with an intense visual beam. My co-conspirator in this task was the architect Koji Suzuki, who brilliantly took my initial sketches and transformed them into thematic landscapes. Complementing these was the lexicon itself—a kind of Burrough-eque cut-and-paste vernacular that was especially created to attune each word to the equation at hand.

Each song started as a visual score, drawn in linear form, rather like an Egyptian hieroglyphic frieze. The musical instrumentation was then selected to match each visual image. Naturally, this led to a non-musical form of many of the scores, and even dictated how the musicians emotionally played their particular parts. Cultures were plundered with irreverent abandon too—as is the case with the Balinese Monkey Dance choral conclusion of Pygu; the Brazilian voodoo ceremonial melody in Psalm of Motion; the North African drum frenzy of A(MA)ze in (G); the Chinese opera overdub on C2H5mystery; and the Arabian lilt of Arkwork. Nothing was sacred—just throw it in, weld it on, cut it up, and bastardize it.

EQUASIAN is collection of ten authentic equations: Pygu: the light properties a linguistic jungle; The Psalm of Motion: the measured swing of a pendulum; Fury Unto Feathers: Icarus’ fall under the influence of gravity; The Glass Language: the pressure of a heavy hammer; A(MA)ze in (G): the geometric features of maze in the chord of G (amazing!); C2H5mystery: a chemical concoction: Masq Vanittii: Einstein’s theatrics of time and space; Engyna: the grindings of a female machine; Arkwork: the miscible qualities of water, and The Archers of Ardour: the trigonometric flight paths of sonic arrows.

Even my attire entered the equation. Albion spliced with the East —the jacket of kimono silk, that infamous hat culled from the remnant of an obi, and myself posing, in all my pomp and glory, as some self-crowned prince of my own mythical making.

Today I truly have to marvel at my own fanaticism to create the most brilliant beast. Sometimes it all seems to balance, and then again it all seems to tipple into the fathomless abyss. At times I believe I discover synergic penicillin, and at times the laboratory erupts and explodes. But I presume that too is all part of the equation.”